New e-book on Nook: Jennifer Aniston is My Best Friend

A few weeks ago my e-book, JENNIFER ANISTON IS MY BEST FRIEND, launched on Amazon and a whole bunch of people said, hey what about Nook?  So my Ninja Webmaster/Cowboy Book Designer just put a version up on the Nook so it's now available at Barnes & Noble's website.  Here's the link for you to head straight on over there and get a copy for yourself or buy it as a gift. 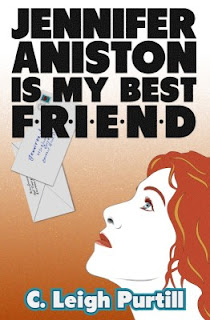 Speaking of gifts, have you had a chance to gift an e-book from Amazon or Barnes & Noble?  It's super easy.  I did it recently on both sites and it was so tempting to send a whole bunch more to other people.  And it's also super easy to loan books on Kindle.

(And by the way, my e-books are loanable because I don't believe in Digital Rights Management! You buy it, you loan it.  That's your choice.)

So in case you forgot, here's the link to my Amazon author page where you can see my e-books and e-shorts yourself.
Posted by Leigh Purtill at 4:06 PM

Something Wicked This Ray Comes...

When Ray Bradbury passed away last week, the internet poured out its collective heart and soul into beautiful posts about the impact the author had on so many lives. His influence on writers, readers, television watchers, moviegoers, and theater audiences was tremendous.

I loved his "The Illustrated Man," a collection of short stories including the insanely-good "The Veldt" and of course, the amazing "The Illustrated Man." His novels "Something Wicked This Way Comes" and "Dandelion Wine" always spoke to me on a child-like level.  Although our upbringings were so very different, I still felt like I could relate to his Iowa-cornfields-on-a-late-summer-night sentiments. 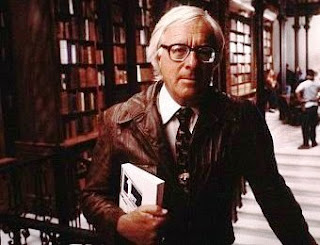 When I think of Bradbury's work, I feel it in my bones.  I feel the longing for something beyond us, the playfulness of never-ending childhood, the wonder of the universe.  But although he believed in the ultimate good of humanity, he never forgot how razor-thin the line was between good and evil.  In his short stories and novels, his villains might have been vanquished - or not.  They might have been us.  In many instances, such as "Fahrenheit 451" we were our own worst enemy.

I can't overstate his influence on how I write or read. The very first novel I began writing (which remains unfinished) had its beginnings in his work.  I have re-read more of his stories than I have of any other author.  When I need a strong shot of good stuff to inspire me or comfort me, I'll pick up "The Martian Chronicles."

Not long after I moved to LA, I was fortunate to meet Bradbury for the first time at a bookstore signing - for someone else's book!  It was a collection of his covers, put together by Jerry Wiest, who was there for the signing.  Bradbury came too.  He did speak but kept his part short; he was gracious about leaving the floor to Wiest since it was his show, not Bradbury's.

I soon learned that Bradbury was - despite his age and increasing inability to get around well without assistance - incredibly generous with his time. He appeared at the same tiny book fair I did when my first novel was published.  He spoke - lovingly, passionately - about writing, about doing what you love with little regard for fame or fortune or public acceptance.  He was the embodiment of that belief.  He wrote what he wanted when he wanted.  He did TV and movies and he wrote shorts and novels - and refused to be classified as a science fiction author.  He was a fantastist, a writer of fantasy.  That he loved space and wondered about our place in the universe was secondary.

The final time I met him was at another book fair, this time in West Hollywood.  Lines, lines, lines - everyone wanted to see Ray. I didn't get as much time with him as I did at the previous smaller fair because so many people were waiting but I did tell him what a major influence he was on my books.  I told him I was at the fair because of him, because what I'd written had been published. He smiled and told me he was glad he could help me fulfill my dream "in some small way." Small?  Hardly.  A dream? Definitely.  A dream inspired by him and his writing.

Read Bradbury if you haven't already.  Find a story, a novel, a play, a movie, an episode of The Twilight Zone.  I dare you not to be inspired.
Posted by Leigh Purtill at 9:55 AM

Why re-release an OOP book?

First of all, my novel, JENNIFER ANISTON IS MY BEST FRIEND, is now available on Kindle and soon will be on Nook.  Yay!  It's got a cool cover and everything.

It was originally published as LOVE, MEG back in 2007.  It went out of print (OOP in pub-speak) in late 2009 and the rights reverted back to me a few months later when I requested them from the publisher.

So why I am re-releasing it now? And in fact, why would anyone re-release a book that has gone out of print?

Well, for one thing, not many people have seen it.  Clearly!  Or else the book might not have gone out of print in the first place.  Every year, thousands of books are released by the Big Six publishers and thousands more by small and independent presses.  It's just a fact of publishing life that not every author will get a share of the marketing pie.  There are only so many spots on that Barnes & Noble table, after all. I don't believe MEG got the push it needed to get into readers' hands.

Secondly, more people have e-readers than ever before and they are always hungry for new material to read (I know I am!).  Because I am publishing this independently, I have the ability to price the book at a more-than-reasonable 99 cents.  How's that for a deal?  Seriously, I'm not trying to get over on anyone.  I know the book was previously released so I think a buck is a decent price. Anything to get more people reading it.

For a third reason, I never liked the title it came out with.  It was okay but it didn't really convey what the book was about. Way too many people commented that it sounded like a romance (and then they were disappointed it wasn't!) or that it was too generic and bland. I understand that. Which is why I wanted to go back to my original title, JENNIFER ANISTON IS MY BEST FRIEND, in much the same way I reverted to FAT GIRLS IN LA for the VEE novel. The titles are eye-catching and thought-provoking and they make you want to pick them up for a look-see.

And finally...yeah, I like this story.  I like FAT GIRLS too. I want other people to see them and get to know them. I felt bad for my books when they went OOP. They were like my children who got rejected from a good college. I kept thinking, "No, give them a chance! They're hard workers and funny and sweet. They may be smaller than the other kids but they're just as smart."

You never want to see your kids rejected. So now I have the opportunity to send them off to school in my own way.
Posted by Leigh Purtill at 9:23 AM