If you remember on Maureen Johnson’s site (http://www.maureenjohnsonbooks.com/), she talked about googling herself and all the different people she found who shared her name. (And if you haven’t checked her site out, you really should - her blog is hilarious!)

I have to admit, until I started my own web site, I never googled myself. Never. I was afraid it would look too vain to, you know, other people…not that other regular people would know what I was googling but it’s kind of like when you put “poodles” and “chocolate” in a search engine at the same time. You have no idea what you’re going to get: chocolate in the shape of poodles? Poodles who like chocolate? Recipes for chocolate covered poodles?

Worse is what people who monitor those search engines will think about you. And you can be sure someone is watching those engines. Not every single one because that would be insane but there is a way to track what people search.

Oh, the book is not that long. Put some KT Tunstall on your iPod and finish it up.

Done? Excellent. Did you like it? What did you think of the part when Winston and Julia rent that room? Did you think it was a set-up from the beginning? And what about the rats? Omg, the rats! Yuck! Don’t tell me you skipped over that! 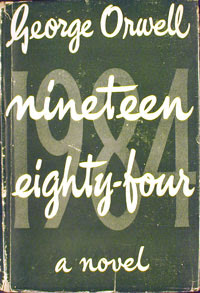 Okay, so I’m not saying Google is Big Brother, not at all. I do think it’s all-knowing and all-powerful…kind of like Big Brother. Hmmm…no, seriously, I do love Google and if anyone from Google is googling me, please don’t take my Google away!

Your Hollywood connection,
Leigh
Posted by Leigh Purtill at 8:28 AM