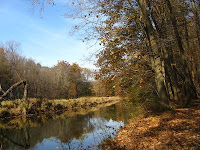 For those of us who grew up on the east coast, particularly New England which has four distinct seasons at consistent times of the year, fall has always been marked by Labor Day. Even if the new season doesn't officially begin until September 21, we have always known summer ended with that last long weekend. School starts up again, Halloween decorations are in the stores, and wool is a key ingredient in everybody's clothes.

Yeah, we used to sweat a LOT in our new school clothes. And when I was a cheerleader, we couldn't wait for cold weather to make us more comfortable in our heavy uniforms.

But here in LA, as it is in many southern and southwestern cities, fall is only a concept. The daytime temperatures don't change much, even when you flip the page of the calendar not once but two times, especially in the Valley where you are still using your air conditioning until long into October.

I love that the warm weather lasts for most of the year here. I love that I don't wear wool. But I kind of miss the autumn of my youth: the smell of apples from the orchards up the street, the cool crisp air in the mornings before school began, the colors of the leaves changing from green to red to orange. I never liked snow much (unless I was inside at the time) and I don't like being cold and bundling up in layers but I loved, loved, LOVED fall.

As an aside, when I read books by Ray Bradbury, I always think of fall. He writes in a certain melancholy that I identify with the season: Something Wicked This Way Comes in particular comes to mind.

I wonder, though, how much of that is merely my romanticizing my younger days. Just as HH and I were longing for New York City when we were watching "Ghostbusters," perhaps I'm longing for a fall that no longer exists. We couldn't return to NYC and expect to have what we had when we were 10 years younger and living in our tiny apartment in Brooklyn, nor can I expect to have the same sort of fall if I were to return to Connecticut.

That makes me even more melancholy.
Posted by Leigh Purtill at 7:45 AM