Review: "Needs Must When the Devil Drives" by Rachel V. Olivier

Full disclosure: Rachel Olivier is a friend of mine and the copy editor of my upcoming novel, "The Rise of Ginny."  However, that doesn't mean she's not also supremely gifted as a writer as well.

First of all, the title.  It's a paraphrasing of a quote from Shakespeare's play, "All's Well That Ends Well" and refers to the kinds of things people do when they are desperate. Particularly appropriate for this novella.

Second of all, the subtitle. "An Apocalyptic Romance." Who has time for romance during the Apocalypse? Yes, this too is appropriate. 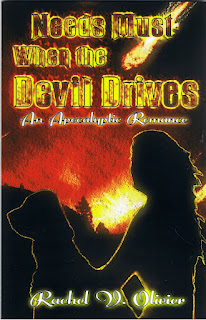 The main character, Kelly, is a bit of a sad sack who has been feeling sorry for herself and her current life situation.  She left her small town in Washington state to be an actress in Los Angeles but never made the splash she'd hoped.  When her mother needs a caretaker, Kelly promises herself it will only be temporary, that her move home will be just for her mother.  But instead, she stays a lot longer than she ever intended and even takes a local job.

Kelly is at a crossroads in her life: does she stay in her small hometown and acknowledge defeat in the acting world or does she plunge back into the movie scene and feel guilty about her mother's worsening condition?  She packs her dog Jake into her car and heads out on a camping trip to clear her head.  While she's out communing with nature, something very strange occurs but she doesn't realize how devastating it will turn out to be until she begins investigating the next day.

No cell phone service.  No electricity. No living humans.  Only the charred remains of people and animals and a weird black soot on everything.  She is determined to go back home and see her mother; on the way, she meets Dan, another survivor. Together, they travel back to her small town and fall in love along the way.

Most stories that deal with end times are grand epic things.  The characters are often heroic on a big scale and we have interaction with the thing or things that caused the end times to occur.  Not so with Olivier's novella.  Her Kelly is no action hero.  She is just an average person dealing with the aftermath of a major event, but in her own small way.  She doesn't join a traveling group of survivors, a la Stephen King's "The Stand."  She is all alone, thankful to meet Dan and to have her loyal dog with her. But it's all the stuff that she thinks about, the pettiness she feels from time to time, the guilt she suffers from, that makes this story truly enjoyable and relatable.

I love that Kelly worries about bad breath and drinking warm beer in the morning.  I love that she is snippy and tired and on edge.  I love that she is sometimes selfish and often squeamish.  And I love her voice.  She is not snarky or too self-deprecating. She is an imperfect human and she is all of us. She is how many of us would be during a situation like this.

Currently, I am writing a novella so it was a great time for me to read Rachel's new one, her third published.  A novella is not a long short story, nor is it a short novel.  It is its own art form.  Many famous literary figures wrote novellas, classics like John Steinbeck's "Of Mice and Men" and Joseph Campbell's "Who Goes There?" Yet often novellas are treated like a novel's poor relations.  Writers themselves kind of say, "Oh, huh, this isn't big enough for a novel but I have more to say than in a short story."  Many reluctantly go forth with the novella and say, "Market, be damned."

"Needs Must..." is the perfect story for a novella. It is a personal tale with an apocalyptic backdrop, a very human story. Buy your copy at Sam's Dot! And to learn more about Rachel, check out her blog and follow her on Facebook.
Posted by Leigh Purtill at 3:15 PM