...and I'm not in the least bit ashamed.

True, I write in the genre but I read it as an adult long before I ever wrote it. In fact, I can remember very distinctly the first time I picked up a novel that was YA - and I had no idea it was for teens. It was Robert Cormier's "Fade," and it was a mass market paperback on a rack in the Glastonbury Public Library. I think I was 25 or so and I consumed huge amounts of fiction in my unhappy-at-the-time life.

I was working a 9-to-5 job in a field I had not studied and didn't really care about. I had my own apartment where I watched "Beverly Hills 90210" and "Star Trek" and painted giant abstracts on canvases that I built and stretched myself. I enjoyed teaching ballet to kids in the evenings and on weekends and was trying really hard to quit smoking.

And I read. A lot. I had a library within walking distance so I could come home from work, kick off my pantyhose and heels, throw on some sneakers and start walking so I wouldn't have think about the fact I was trying to quit smoking. In that library, I devoured all of the paperbacks I could find because they were easy to carry home to my apartment when I was walking with them. Hardcovers meant I could carry fewer books and that wasn't good at all.

From the looks of it, "Fade" was not a teen romance or an issue book. In my mind, a teen book was either something written by Judy Blume or one of those drug/suicide/mental illness books, like "I Never Promised You a Rose Garden," "Sunshine," or "Go Ask Alice" - all of which I inhaled as a teenager. 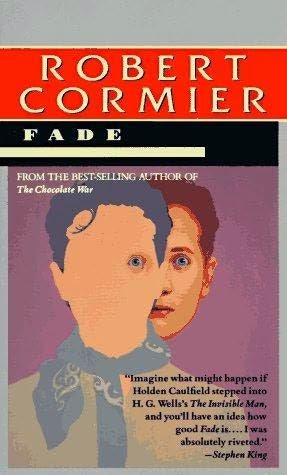 "Fade" had a character who could become invisible (or fade) which was pretty cool but Cormier did not use the ability to create a superhero. His characters are seriously flawed, some evil, some cruel, some just plain amoral. When you read this book, you feel like you need to shower. Images stick with you for a very long time. "Fade" is one of the few books that I read in a library and later bought a copy of because I had to have it at home, had to have it to loan to others.

No one in their right mind would call this fluff. The writing is smart and sophisticated, the themes incredibly dark and complex. But there are no messages in the book, no voice of the author tut-tutting and saying, "Now, kiddos, don't do this kind of thing..." Nope. Cormier wrote it and let you sort it out your own damn self. That's what he did with "The Chocolate War" and "I Am the Cheese" - more rich, complex stories with compelling characters.

Many people have tried to figure out why adults read YA. Some insist it's a fantasy life they want to lead, some think it's escapist. Others think adults want simple answers to complex questions. For me, YA books help me figure out who I was which helps me understand who I am now, who I might become in the future. When I read books about bullying and mean girls, I see myself as a teenager doing some of those terrible things, saying some of those terrible things - and it makes me want to be a kinder person now. When I read about girls who dump guys without a care in the world, I remember I had done that a time or two - and it gives me pause when I need to politely turn down someone's request. And as a teacher dealing with all sorts of personalities, these books give me insight into the many types of people I didn't know in high school, the varied cultures and races and genders I never experienced. In other words...


Reading YA novels makes me a better adult.

Could I get the same insight from adult novels? Sure. I can and I do. I don't read YA exclusively, nor do I read contemporary novels exclusively or only watch science fiction TV and movies. My literary diet is varied and complex and I like to feed it whatever it needs whenever it needs it. If someone wants to shame me for including YA (or middle grade if we include the early Harry Potter novels, which were also awesome), then it's their great loss. They probably should check out one of those mean girl books and see if they recognize themselves.