Ah, the old alma mater...so much has changed, so much has remained the same. For instance, I walked in the side door which used to be near the main office and I told them I was a visitor and they looked at me like I was crazy. The main office had moved to the front of the building! 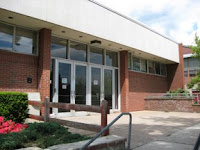 This is the WRONG door! 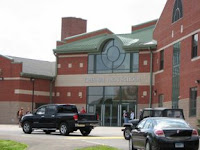 This is the RIGHT door!

But the Senior Walk was still there and the gym (there are 2 now) and the library looked the same too, although they had way more computers than we ever had (computers were just a bare figment of the popular imagination then). 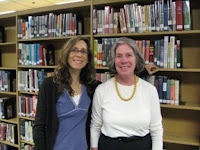 Me with Ellen Speirs

The first class librarian Ellen Speirs introduced me to was Diann Milone's Creative Writing class. I think they might have been a little shy (or sleepy?) because they were kind of quiet but they did get very animated when talk turned to Veronica and her size (they didn't think the girl on the cover was at all plus-size).


Second class was World Lit, Megumi Yamamoto's class, which we sat for in the library. They had a lot more questions and wanted to know about writing and publishing and what sort of movies I like that had been adapted from books.


After lunch (with the teachers in the faculty lounge! I felt like I was spying!) where I met a teacher from my old days, Rob Schaefer (although I didn't have him as a teacher), I went back to the library to talk to Donna Carbone's Film and TV class. After telling them all about my experience as a script supervisor and standards editor, talk quickly turned to writing, especially screenwriting and books and LOST and movies and Denzel Washington and how great Robert Downey Jr was in "Iron Man."


It was another amazing day with more amazing students! I hope they all remember to email me if they have questions I didn't get to answer.


I think I'll have to devote an entirely separate blog post to all the stuff I observed at CHS and how it influenced what and why I write about schools in my own books.

Oh and a Cheshire Herald reporter was there to interview me which was way cool because I remembered that a couple of the very first things I had ever written were for that publication many, many years ago! They were sports articles! Wow, strange how things come back to you, huh?
Posted by Leigh Purtill at 5:05 AM