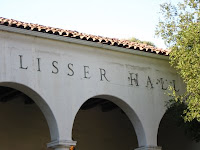 On Saturday, I was invited to be part of a YA author panel at the SCBWI conference held at Mills College in Oakland, which is northern California near San Francisco. What a gorgeous campus! And for those of you who are counting, it's a women's college that was started by an alumna of Mount Holyoke College in western Massachusetts which is where I got my undergrad degree.

This was my first writers' conference EVER, which was a huge surprise to my fellow speakers, all of whom were far more seasoned. Thank you to them all for making this a really great experience for me. And a great big special thanks goes to Margaret Speaker Yuan and Colette Weil who invited me and who put together the whole thing. They did an amazing job. Every detail was so well-conceived and the conference itself was so well-organized. Kudos! 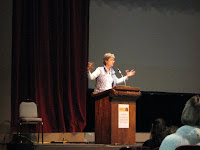 First up, to begin our day at Lisser Hall, keynote speaker Elizabeth Partridge, who has written several nonficton biographies of John Lennon and Woody Guthrie, among others, talked about the business of being a writer, not just the important things like getting reviews and using the internet but also the philsophy of being a writer. She talked about her "mean Barbara" who sits on her shoulder and whispers negative thoughts like, "You can't do this, who do you think you are." We all have a mean Barbara - whether it's a real person or just the voice of our subconcious mind - and we have to push her away. 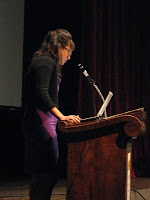 Next at the podium was editor Gretchen Hirsch of HarperCollins who discussed her favorite first pages, from books she's loved as a reader and as an editor. Among them, Louisa May Alcott's "Little Women" and E Lockhart's "The Disreputable History of Frankie Landau-Banks." Most interestingly, though, she took us through several drafts of the first page of a novel called "The Body Finder" to show us how she and the writer worked through changes to make it smoother and more concise, selecting just the right words to convey meaning. 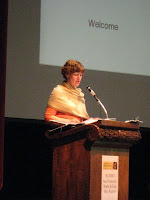 Following Gretchen was agent Erin Murphy of Erin Murphy Literary who talked about query letters. She had us in hysterics as she read some of the awful mistakes people make when sending letters to agents, including one hilarious letter from a man who must have been a car salesman in his daily life because it was filled with "offers" to Erin to be part of the millions his books will surely make. Erin basically told us, look, it's one thing to be confident in your work but another to treat it like a money-making venture. When you query an agent, you want to be personable, to give him or her a reason to want to read and like your work, and to want to pursue you as a client. She also read letters that she liked and made her want to read more of the writer's work. 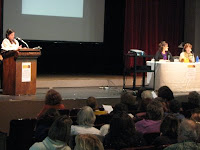 Then Erin and Gretchen took questions from the audience through Margaret Speaker Yuan at the podium. 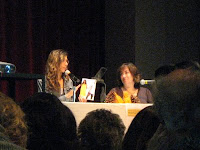 And very quickly, it was Carrie Watson's (QUAD) and my turn, with Betsy Partridge as moderator. We talked about...I have no idea! I think we talked about writing and what it was like to write about difficult issues for teens. It's hard to remember because I was so focused on all of those people looking up at me. If anyone reading this attended, maybe they can remind me of what we said. I'm pretty sure Carrie got a bunch of laughs because she's very funny. Me, I'm more like a deer in the headlights, regardless of the kindness of some attendees who said I did a good job. 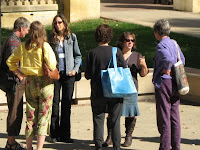 And then it was on to lunch where HH and Carrie and I hung out with some attendees and Colette. We stayed for a short while to hear editor Julie Romeis of Chronicle Books talk about Lisa Kline's book "Ophelia" but then we had to leave to get back to LA. HH was a groomsman in his friend's wedding the next day and we didn't want him to be super tired - too exhausted to put on his tux.

What a great weekend! I so wish I lived closer to Oakland because there were some amazing people I met up there and I adored Mills College - like a west coast version of my alma mater! And a super special thanks to Luan from Laurel Books in Oakland who provided all of our books in a sort of mini-store outside the theater. 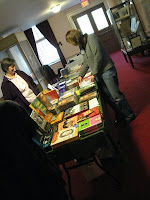 Posted by Leigh Purtill at 7:45 AM