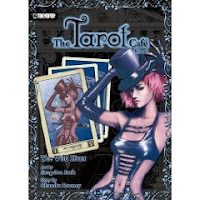 Chandra Rooney, the author of "The Tarot Cafe Novel: The Wild Hunt," stopped by a couple of weeks ago to guest blog about the differences between writing for hire and writing an original novel. Tremendously informative post! This novel is Chandra's debut and it was, as she described, a work for hire. In her case, the editor at TOKYOPOP contacted her through her website and queried her about writing the first novel of a series that was based on a very popular manga called "The Tarot Cafe" by Sang-Sun Park. Together they developed the outline before Chandra went off to write it on her own.

[NB: I have always felt intimidated by manga, those Japanese comic books that are read from back to front and up-right to down-left or in a circle or triangle or something else equally frustrating. There is a short manga that is included at the back of this novel and it has written instructions for reading it! That was very cool and helpful.]

Since I'm not a regular manga reader, I wasn't sure if I would understand this novel: would it be based on long-established characters I didn't know? Would it be set in a world completely unfamiliar to me? Would I feel awkward or, worse, uncool? The answer is no to all of those questions.

First of all, even if you've never heard of manga or a light novel, you will have no trouble understanding this world. Rooney creates a London that is just slightly off-center, one that you will recognize: Kensington Palace, Hyde Park, the Tube, etc. but imbues it with an underlying darkness that no amount of sunlight can diminish. Many times, I felt the claustrophobia Bryn feels, the inescapable closing-in of my surroundings, simply because of Rooney's very precise word choice. She is a master at specificity.

Second, you don't need to know what Tarot cards mean, what each of the cards relates to, because the author deftly weaves in their explanations without the dialogue or prose ever feeling expository. Neither does she talk down to her reader, assuming you know nothing of Tarot. I think it helps to know why people would seek a Tarot card reader but beyond that, knowledge of the topic is unnecessary.

And third, the fantasy elements seem completely integrated into this almost-London. I can believe Bryn sees and hears the stomping hooves of the Hunt horses, smells the spittle and sweat of the dogs. That she has a supernatural ability to sense things a normal person cannot is absolutely believable to me. I never doubted her skills - or Pamela's, the woman who reads the Tarot for her.

The story: Bryn McAllister is a young actress whose star is on the rise; her fiance Jack is a painter who has struggled with success. Bryn awakens one day to find Jack has not returned to their shared flat. She leaves to attend an audition, worried about where he is and why she can't seem to reach him. Her visions of Jack being hunted by wild dogs, chased by a Hunstman and his demonic hunters, make her question his safety. When she visits Pamela, a Tarot card reader at the Tarot Cafe who has her own haunted past, she gradually comes to a conclusion about what she must do to help Jack.

The novel asks a simple question: what are you willing to do for love? Both Bryn and Pamela struggle with the answer. Bryn is young and impressionable; Pamela is older and presumably wiser. Both are deeply torn between love of self and love of other. I won't spoil it for you by telling you what choices are made.

Chandra Rooney's prose is lyrical yet never purple. Her dialogue is fresh and hyperreal as befits a fantasy novel. I love lines like this: "[Bryn] uncapped [the turpentine canister] but found it empty - only a faint whiff of Jack left inside, as though he'd already started to fade from her life." (p. 73) I envy Rooney's skill at parsing the most succinct and evocative sentence - paragraph after paragraph, page after page.

Recommended to all readers, young adult and older, but especially to those who enjoy urban fantasy like Melissa Marr's "Wicked Lovely" and Richelle Mead's "Vampire Academy."

You can visit Chandra at her website or order her book at Amazon or Barnes & Noble.
Posted by Leigh Purtill at 11:59 PM