1. Men's short track speed skating - I thought I'd be rooting for Apolo Ohno but now I'm a JR Celski fan, the 19 year old who seems to be following in Ohno's steps (or skates). And I totally dug the relay. It looked so complex with all those people on the ice - how could they tell who was up next?

2. Women's snowboarding half-pipe - I love these girls! Sure a lot of them wiped out last night but that was because they were kicking butt and taking names, going for the big air, the twists and turns. Very impressive - and no tears for the losers. These women are pros. 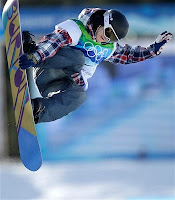 3. Men's snowboarding half-pipe - Who doesn't love Shaun White? I mean, seriously. Did you see his final run the other night - *after* he knew he had the gold? And his teammates were no slouches either, despite the grunge-inspired uniforms.

4. Women's moguls - I had no idea this would be so interesting. I thought it was strictly speed but as it turns out, there are some jumps involved which require judging. Plus each run is short, which I like - long slalom events kinda bore me.

5. Men's and women's skating - We've only had men so far and they have all been fantastic, although as a friend told me, they really need to lose the Bob Mackie-designed costumes (except for Johnny Weir, the only one who can pull off the flamboyant look). I was so bummed for Jeremy Abbott in both of his programs but I think the men have a lot of young talent coming up the ranks who will raise the bar next time. Can't wait for the women's events!

I have to admit I'm a little burned out on the Olympics and they're not even half over! It's a function of there not being anything else on of interest when I come home late at night, plus it's only once every few years. I just have to watch.
Posted by Leigh Purtill at 12:04 PM