I’ve been going through a dry spell recently in regards to my celebrity sightings. Either they’re all staying away from me, knowing I will mention them on my website, or they’re out of town. It all adds up to no new sightings for me in the past few months. I thought I might have seen Julianna Marguilies in her car near West Hollywood but it was wicked fast and it could have been nobody. And I’m not gonna cheat you and say it was when I didn’t have a witness.

So what do I have instead? Pseudo sightings. HH and I were in Frankie and Johnny’s Pizzeria on Sunset this weekend (we had walked there and it was hotter than Hades that day!) and we noticed that visiting celebrities have written their names and notes on the walls with Sharpies. Well, of course there’s a big sign that tells the regular folks not to do any such thing but if you’ve got a TV show, go for it!

(They used to do this at another pizza place we liked called Albano’s Brooklyn Pizzeria on Melrose but that’s gone now, taken over by Enzo and we haven’t been back. Anyway, celebs wrote on their walls too. It must be a pizza joint thing.)

So here are the names we were sitting next to along with one of HH to prove we were there. Hehe… 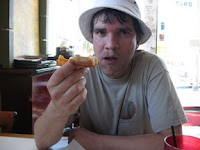 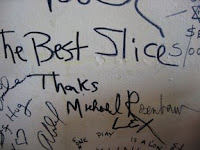 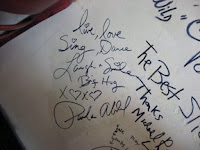 I have a hard time imagining that tiny little thing eating a slice of pizza. Maybe she just had a salad.
Posted by Leigh Purtill at 7:35 AM