"Who does that fat girl think she is?"

That's the strange comment I've read on some reviews of my novel, ALL ABOUT VEE.  Perhaps not quite as harsh but certainly I've read comments that express that sentiment.

Why?  I always wonder.  Why would a reader be upset that my mc, Veronica May, a plus-size actress struggling in Hollywood, has confidence in herself?  Plenty of other characters in other books know they are good at something, whether it's acting or painting or sports. So what's the difference between them and Veronica?

There's an attitude among a lot of people that overweight women shouldn't be happy with themselves.  They should want to look thinner.  They should not like who they are.  They should feel inferior to others.  Many readers who pick up VEE expect that Veronica will be sad or have low self-esteem and that, over the course of the book, she will learn to love her body the way it is (or change it and then be happy and get the guy!). They don't expect that the problems she has in the book are ones that other people impose upon her.

I've often told readers how I came up with my story about Veronica and her friends, Val and Ginny, the original 800 page book that was called FAT GIRLS IN LA. I had been walking on my lunch hour in Beverly Hills and saw a lovely young woman waiting to cross the street.  The neighborhood was filled with agencies for film and TV and this girl was overweight.  I wondered if she was an actress looking for an agent - or maybe she was a model or a writer. I thought about who she might be, where she might have come from.

And I thought about being a fat girl in LA.  You can never be too thin in this town, no matter what your profession. Even if you're a writer and you're attractive and thin, they can promote you better than if you're not.  Everyone, it seems, wants to be thin here.  But what if you came from a town where no one cared?  What if you were really good at what you did but you also happened to be overweight?  Why should that matter?

Behold, the Vees were born.  Three plus-size gals from Arizona who were best friends and who wanted to make their lives more exciting so they moved to Hollywood.  Veronica was the actress and she got all the best roles in her small town - why shouldn't she be positive about her talent?  Why shouldn't she assume she could get roles here in LA? Ginny was the writer and Val was the model. They all suffered discrimination here.  Their friendship was tested.  Their self-confidence was challenged.

I think a lot of readers who have problems with Veronica's positive self-esteem have struggled with it themselves. They may want her to feel as they do and are disappointed that she likes herself the way she is.  They may have had people in their lives tell them they need to lose weight in order to be hired - or loved.  Make no mistake: Vee does not think she's the best at everything, that she's beautiful, that she should get every guy she meets.  That's the assumption readers place on her just because she's a good actress. She struggles too.  She just doesn't struggle with what you expect her to.

Posted by Leigh Purtill at 9:08 AM

1. First of all, the cool kids call it "indie" publishing and as we all know, when you stick the word "indie" in front of anything, its cachet is magnified a thousandfold.

2. Apparently, there was no Chapter 13 in my published novel, ALL ABOUT VEE.  Yes, it's true!  There's a Chapter 12 and a Chapter 14 but no 13.  This was due solely to human error (many humans' errors), not a superstition, although if it had been a superstition, that would have been pretty neat.

As we reformat the book to publish it as FAT GIRLS IN LA, I'm making changes, adding a little material here and there that I always wanted kept in.  So there will be a Chapter 13 in the new edition.

3. I only used one ellipsis in the entire novel of ALL ABOUT VEE.  Weird, huh?  An ellipsis is "..." Which I use all the time in my normal daily writing so it's truly bizarre there's only one in nearly 300 pages of text.

4. LOVE, MEG in Hungarian? Maybe!  When you're getting ready to re-launch, you need to regain control over all the material you own that's out there. Ninja Webmaster and I are always on the lookout for websites that have my ebooks listed so we can get them removed so we are constantly Googling, etc. But according to Goodreads, there was (or might have been) a Hungarian language version of MEG as an ebook and as a paperback.  They have ISBN numbers and everything!
Posted by Leigh Purtill at 3:19 PM

...and she's bringing her friends!

Finally, we've got a little action going here on the blog.  It's been a long time percolating but we've got a brand new cover for the re-release of ALL ABOUT VEE, now titled FAT GIRLS IN LA, as I originally wanted it to be.  Check it out (thanks Ninja Webmaster for the redesign!): 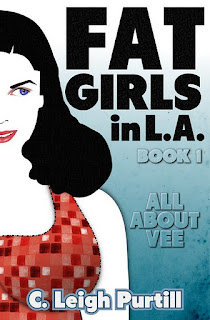 We're all Fat Girls in LA - even the boys.

Vee will be released this month followed by...!  Nope!  Not gonna reveal that title yet!  You'll have to wait til December. Keep up to date with Vee and her friends on her Facebook page or her Twitter page and be one of the girls!

Posted by Leigh Purtill at 3:40 PM