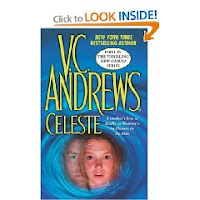 I took a break from the Dollanganger series (when the fourth book was not available at my library) to try out the first in the Gemini series (which I took as a good omen because I am a Gemini and there is much that parallels my life with certain choices in VC Andrews' novels - oh wait, that's kind of a bad thing, isn't?). The first novel is titled "Celeste." I don't think I'll be reading further.

Basic plot: Celeste is the daughter of a woman who believes herself to be psychically connected to the afterlife and who insists Celeste and her twin brother Noble will eventually be able to see and talk to the spirits as she can. This appears to be their lifelong goal. When Noble dies accidentally, Mommy dresses Celeste up as Noble and tells her/him that Celeste is the one who has perished and now she/he is Noble. Wowza.

1. This being a VC Andrews novel, Mommy loves Noble better and tells Celeste she must always watch over him. When Celeste becomes Noble, it takes her no longer than about thirty minutes to completely accept this change because she suddenly believes that it's far better for her to be a boy than a girl and thus receive more of Mommy's unconditional love.

2. Again, keeping in mind the VCA method of plotting, Perfect Daddy dies within the first few chapters. As Mommy gets involved with other men, they too die. I am fully convinced that VCA believes women's love kills men. This is not a new anti-feminist theory; however, most people who supported it have been dead for about a hundred years.

3. Despite this being a relatively recent story told in the near past, the one boy who is involved with the outside world (because Celeste/Noble is of course homeschooled and doesn't go near anyone from the greater community) seems to be transplanted in time as it relates to his speech patterns. On the one hand he calls Celeste/Noble a "pussy" for not wanting to go out on a date but then he also says he "makes love" to his babes.

4. And yes, what would a VC Andrews novel be without the implication of improper filial relations? The boy who ultimately rapes Celeste/Noble repeatedly spies on his sister who walks around her room naked squeezing her breasts and doing um, other things, that he wants Celeste/Noble to watch to prove she/he isn't a "pussy."

Sadly, despite all this magnificent soap opera material, the book doesn't really begin until nearly 100 pages in and then blathers on and on for far too many pages. I've gotta queue up the next FITA book so I can get back to the real cheese.
Posted by Leigh Purtill at 7:34 AM