YA's too dark? Bring it on! 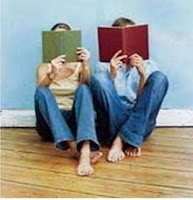 For the past week, the YA world has been aflutter with essays and tweets about the Wall Street Journal opinion article by book reviewer Meghan Cox Gurdon. Here it is for your reading pleasure but I can sum it up briefly: she spoke to a mother who walked into a B&N store and couldn't find a book for her 13 year old daughter that wasn't filled with vampires and werewolves or dealt with issues like cutting, suicide, etc. Where are all the fun books for teens?

Well, LOTS of well-known writers jumped into the fray, providing cogent arguments refuting her claims. Among the best that I read were by Laurie Halse Anderson, Cecil Castellucci, and Sherman Alexie. There are plenty more plus the Twitter hashtag #YASaves that asked people to talk about their own experiences with books and how they helped them in rough times.

My reaction? It's all overreaction. The woman at the store, Ms. Gordon, and many of these writers. First of all, that woman at the store didn't try very hard because there are hundreds of books on the shelves that don't have black covers and "blood" in their titles. And if she bothered to look online, thousands of bloggers would gladly direct her to their favorite contemporary novels. Second, I don't think Gordon was condemning the entire YA lit world but she was making lots of incorrect assumptions. The idea that YA writers and publishers should somehow be held responsible, more so than their adult lit counterparts, is ridiculous. We write stories because we want to tell stories. We don't write stories because we want to be role models or teach lessons. If lessons are gleaned, well, hurrah.

When I worked in network standards, there would be periodic uprisings from Parents Television Council, a very vocal conservative watch group that would freak out about blood on the show "Angel" or sex on just about any other show on television. Language, nudity, sexual innuendo - they would lump it all together and shout, "Enough!" Some show runners might tone down things for a little while in response; some would dig in the heels, but eventually, it all worked out.

In the world of TV, you vote with your remote control. You don't like a show, you don't watch. The numbers get to the networks and they cancel shows that no one likes. It's that simple. The book world is the exact same thing. Vote with your dollars: you don't like a book, don't buy it. Will they go away? Yup, they will. Will this argument- and the one on television - come up again? No doubt about it.
Posted by Leigh Purtill at 8:06 AM