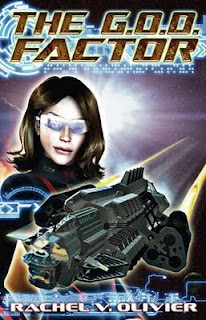 Rachel Olivier's novella, "The G.O.D. Factor," reminds me of some of my very favorite science fiction: a little Ray Bradbury, a little Isaac Asimov, a little Robert Heinlein. It all adds up to a really fun story with a main character you want to spend more time with.

Monica is part of a small crew on a ship in deep space. While she tends to the ship's controls, the rest of the crew (including the captain she crushes on as well as her ex-boyfriend) rests in their stasis chambers. All by herself, enjoying her solace yet a little bit lonely, Monica talks to her plants and to the ship's controls, completely unaware that someone is listening - the ship itself. She's shocked when the Artificial Intelligence that she'd thought had been turned off by the ship's engineer begins communicating with her. It calls itself G.O.D. - Galactic Orbital Dreadnaught - which is a holdover from a long ago war. Monica soon realizes G.O.D. doesn't want to be her friend; it wants to control her and the rest of the crew.

Monica is a clever and funny protagonist who would rather sleep in her flannel pjs on a sofa with a crocheted pillow than in her high tech stasis chamber. There is a sweetness to this story that much SF misses: even in the midst of the crisis, Monica can't help but admire the nude physique of the captain when she awakens him from deep sleep - and then she admonishes herself for doing so! I love the oh-so-low-tech methods she and the crew use to outsmart G.O.D.

The author told me she was thinking about fleshing the novella out more, perhaps examining the earlier relationship between Monica and her ex. I think this would be a great adventure in a larger story and would definitely enjoy reading more about the ship, the past war, and Monica herself.

The slim and easily portable paperback of "The G.O.D. Factor" can be purchased online at Sam's Dot Publishing.

Posted by Leigh Purtill at 5:56 PM