6 Movies I Watched This Week

1. Valkyrie - Tom Cruise as a Nazi who leads an (obviously unsuccessful) coup against der Fuhrer. I wasn't as turned off as I thought I'd be by the non-accent of T. Cruise and I have to say, his hair was amazing! Kudos to his stylist. Supporting cast of Bill Nighy, Kenneth Branagh, Eddie Izzard, etc. were fantastic.

2. 7 Pounds - okay, you know I dig Will Smith more than just about any human on this planet besides HH so of course I was going to love him in this. Sappy? Sure. Manipulative? You bet. Requiring a massive suspension of disbelief? Right on. The people I saw it with did not share my love of Will nor did they suspend their disbelief as I did so they didn't like it as much and the ending is the hugest downer of the year. I cried, cried, cried. And I don't care who knows. Cuz now you do.

3. The Sound of Music - Nazis! Singing Austrian children! Julie Andrews! What's not to love in this? Honestly, I coudn't remember the last time I had seen this in its entirety and I guess I had completely forgotten the beginning and I sort of got confused at the end because I recall in real life they came to the US and I thought that was part of the movie but it wasn't. It just ends with the nuns rescuing them. So it was good to see this again. My upstairs neighbor totally lurvs this.

4. Doubt - Meryl, omg, I heart Meryl so effin' much. She is freaking amazing in just about everything she does. And Philip Seymour Hoffmann and Amy Adams are splendid with a capital awesome. This is another serious movie for Oscar contention and they all deserve it, especially the writer/director John Patrick Shanley who adapted his own Pulitzer-winning play (which goes right on the TBR list - I can't wait to see what he might not have included and if the ending is as ambiguous as the movie). 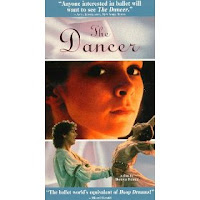 5. The Dancer - a kind of documentary about a young Swedish dancer as she joins the Royal Swedish Ballet, Katja Bjorner. I say "kind of" because it's not a documentary in the traditional sense; there is no obvious narrative and not much explanation about who we meet in the film and what they do and their relationship to Katja. Still, for those of us who love ballet, it's a fascinating study of a very passionate teen as she prepares to dance. And a nice introduction to how pointe shoes are made.

6. Shut Up And Sing - another great documentary, this time about the Dixie Chicks and the hassle they went through after lead singer Natalie Maines told people she was ashamed the president was from Texas- this shortly after troops were sent to Iraq, which made her very unpopular among the mostly-conservative fan base across the country. How the protests against the Chicks affected them and the music they wrote makes for a fascinating look into the politics of entertainment. We went right out to the store and bought their album.
Posted by Leigh Purtill at 7:52 AM