4 Movies to get your mind off Swine Flu

Things could be a lot worse...

1. 12 Monkeys - one of my favorite films of all time, this was based on a short French film called La Jetee, which I believe refers to the "throw" of the time traveling. Bruce Willis' character in the American film is literally thrown into the past in order to retrieve items which will help scientists in the future create a vaccine which will combat the virus which has killed millions and driven survivors underground. This is Terry Gilliam at his mainstream best and gave me new appreciation for the talents of Willis and Brad Pitt. 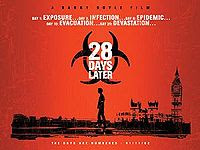 2. 28 Days Later - ah, the fast-moving zombies. Danny Boyle's film is set in Britain after a virus has been accidentally released into the general public and it turns people into crazed "Ragers." I loved this film for its very depressing ending - much like the remake of Dawn of the Dead. Btw, this movie introduced me to the very sexy Cillian Murphy - ooh!

3. Doomsday - another virus has infected the populace, this time in Scotland, in Neil Marshall's film. Marshall directed the amazing Descent which was a wonderful, horrific, female-centric action/horror/suspense film. Doomsday has another strong female lead, Rhona Mitra, who was a Lara Croft model. Mitra plays a special agent who is sent into a walled-off area where survivors have created a Mad Max-ish world; a cure is rumored to have been developed by Malcolm McDowell's mad scientist character and our agent must retrieve it. Not the best, but not bad.

4. I Am Legend - Will Smith, Will Smith, and Will Smith. A virus has wiped out everyone in Manhattan (and presumably the rest of the country), leaving only Smith and his dog to fight the zombie/vampire survivors in this film by Francis Lawrence based on Richard Matheson's novella. I loved this film until the introduction of the woman and boy, which I found to be suddenly too uplifting and took the film in an optimistic direction that strayed much too far from Matheson's fantastic story. Watch it until then and shut it off.
Posted by Leigh Purtill at 7:41 AM