How I Know the End of Civilization is Near 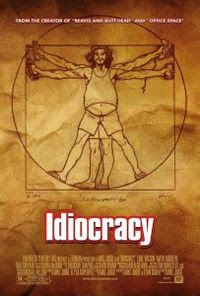 Clever title. Hilarious movie.
Have you all seen the movie, Idiocracy, written and directed by the amazingly talented Mike Judge? He is the brilliance behind "Beavis and Butthead" and "King of the Hill" and his first live action film, the underrated Office Space. If you haven't seen Idiocracy, put it on your Netflix queue right this very second! I'll wait.

Okay. In Judge's film, society has devolved to the point of idiocy, with ex-wrestlers running the country and Costco awarding law degrees. Product placement is everywhere, on every item of clothing and as part of people's own names. It's a hilarious and scary movie.

There is a film within the film called, appropriately-enough, "Ass." It is simply a guy's bare butt on the silver screen for 2 hours. It's wildly popular and has even won Academy Awards. You would think such a thing is ludicrous, yes? Well, look no further than the upcoming film, The Hangover. It's about...a hangover. Let's see: bachelor party in Vegas. Drunken adventures. Yup, that's about it.

Bad title. Funny movie?
I'm sure it's a very funny film. Saw the trailer before the phenomenal Star Trek. Looks like a great cast. But couldn't the filmmakers try a little harder to be clever with the title at least? I mean, the concept is hardly revolutionary (did I mention drunken bachelor party adventures in Vegas?) and the story has been told since the days of Shakespeare. So couldn't anyone in the marketing department at Warner Bros. come up with something, um, more original? And this is not the first time I have thought this: Knocked Up was just as generic and simplistic, perfect for where our society is headed.

Don't bother thinking; we'll do that for you. You people just save your tiny shrinking brains for more important things, like which overpriced American car to buy and how many iPods you own.

I foresee The Hangover 2 in the future...why, what do you know? It's already scheduled for a 2011 release. Pure awesome.
Posted by Leigh Purtill at 7:36 AM