That's West Hollywood, for the uninitiated...

HH and I were up on Sunset, taking a late afternoon walk up to the former Virgin Music complex. There used to be a Buzz coffee which is now a Starbucks, of course, and a guitar store which is now a Trader Joe's (always good to have a TJ's nearby). Still have the Sunset 5 theaters, which is home to some great indie films, and there's a Burke Williams spa too.

And a CB2, which is apparently a new Crate & Barrel store.

Can you say...ahem...I mean, can you sing major music star! Like, huge musical legend known all over the world? Beloved by generations of fans???

Like, holy pianissimo! HH and I were checking out the sterile office furniture, the bland bedding, the uncomfortable love seats when HH leans over and whispers, "Stevie Wonder is here." Sure enough, I see everyone around us - very cautiously, very casually, very coolly- check him out. No craning of necks in this sophisticated neighborhood. No snapping of cell phone cameras. But oh yes, we all noticed him. He was with a couple of other people in line - IN LINE! - for customer service, and no one bothered him, no one asked for his autograph, no paparazzi flashed their cameras. 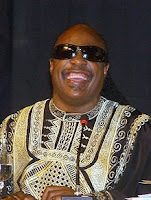 [Personally, I think taking a photo of a blind person when they are unaware of it is kind of rude. I mean, seriously, if you're going to take a picture of someone like Stevie Wonder, you should ask first.]

He was dressed in a black suit with his hair in long braids, his signature black wraparound shades on. And btw, it was frakkin hot in Weho this weekend so I was doubly impressed by his cool demeanor. He smiled, he chatted, he waited patiently.

As for HH and me, we came, we saw, we left. We were awestruck for the first time in a long time. This was definitely a big one.

When you believe in things,
That you don't understand,
Then you suffer,
Superstition ain't the way...
Posted by Leigh Purtill at 7:43 AM