HUGE congrats to my former co-worker, Michael Ferrari, who used to sit next to me in our cubes at The WB in Burbank when we were both standards editors. His new book, BORN TO FLY, is in stores now! Check it out: 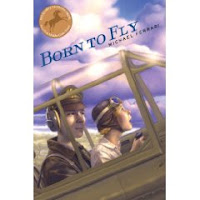 I read a very early draft of the book years ago when we were trading material. Michael read the first draft of my very first novel too. It was called FAT GIRLS IN LA and eventually became ALL ABOUT VEE. He was the one who read it and pronounced me a real writer which gave me a huge boost of self-confidence.

Eventually, Michael left the network, moved back to Ohio with his lovely family and entered the manuscript in the Delacorte Yearling prize for middle grade books and won! I was so thrilled for him! And now, it's published! Yay!

Here's Michael's very cool website - love the design of his book cover! So retro and yet still very modern. He's gotten some great reviews from Booklist and Kirkus - yes, Kirkus likes him! And who wouldn't? The story's hero is an 11 year old girl named Bird McGill and it takes place during World War II. I love that his hero is a girl - that's awesome! I'm sure both girls and boys are gonna love it.

Many, many good wishes to you, Michael!! Wish I could be in Ohio for your first signing but I'm sure it will be just the first of many!
Posted by Leigh Purtill at 7:36 AM