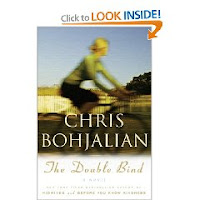 Not YA but still a good book, "The Double Bind" by Chris Bohjalian. Laurel was the victim of a vicious attack when she was in college. Six years later, she has created a life for herself that involves being a social worker at a homeless shelter, living with her old college roommate, and dating older men who don't want any commitment.

When a client from the shelter dies, leaving a collection of photographs, Laurel becomes obsessed with the mystery of this man. Many of the photos are of famous musicians and actors - and one of Laurel herself on that fateful day when she was attacked. Could the man have been connected to a wealthy family from Long Island, the home of Jay Gatsby and Daisy Buchanan?

Yes, that's right. Characters and themes from F. Scott Fitzgerald's "The Great Gatsby" are woven into Bohjalian's story. Many people have criticized the book for some obvious flaws but to be honest, I didn't even notice them until they were pointed out. And while I do agree with some of the criticism, I thoroughly enjoyed the book. It was the perfect literary mystery for a rainy day.
Posted by Leigh Purtill at 1:06 PM