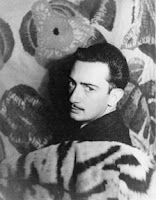 This past weekend, the new Salvador Dali exhibit opened at Los Angeles County Museum of Art and I was privileged to attend a reception and pre-opening viewing of the magnificent works. It runs from October 14th through January 6th and if you're in the LA area or have any plans to visit during that time, do yourself a favor and check it out.

The Times writer Richard Schickel wrote in the Sunday edition that the exhibit was tired, that Dali was hopelessly commercial and that his film endeavors never amounted to much but I have to say, ya know, whatev'.
I'm not an art historian or film critic, nor am I terribly knowledgeable about art history or film criticism (my degree is in the actual production of films and I retained virtually nothing from most of my film studies classes), so what I believe is strictly my own opinion. I thought it was cool.
And I was 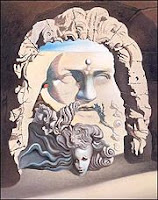 mesmerized by "Destino," the animated film which was based on an original idea by Walt Disney and Dali and used sketches created by Dali. Roy Disney, Walt's nephew, spearheaded the project long after his uncle's and Dali's deaths. LACMA is showing the short film along with all of the beautiful images Dali rendered. I would love to own a copy of this film.
Dali's most notable involvement in film was with the Marx Brothers and Alfred Hitchcock (his dream sequences in "Spellbound" really brought an otherworldly quality to the Hitchcock movie) and of course, the short film with Luis Bunuel, "Un chien andalou,"which brought both of them notoriety.
I highly recommend checking out this exhibit and then playing around with the lobster telephone in the gift shop next door.
Your Hollywood connection,
Leigh
Posted by Leigh Purtill at 5:26 PM