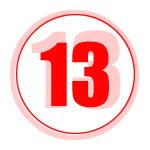 Is this a regular feature? Should it be? I am a listmaker and I have a tendency to think in terms of productivity, hence the end-of-the-week listing of things in my head.

1. Today is Friday the 13th (oooh! scary!). People who are afraid of this day are said to be afflicted with paraskevidekatriaphobia. They won't drive their cars or use anything mechanical; they won't make important plans for the day, like weddings or big meetings. Some people say it dates back to Christ whose 13th disciple betrayed him and led to his crucifixion (which was on a Friday). Others date it to the ancient Egyptians who associated 13 with the unknown realm (12 being the number of realms on earth) and to a story in Viking lore about the god of mischief, Loki, who was not invited to a banquet of the gods at Valhalla - and yes, he was #13.
Statistically, it's not anymore dangerous or deadly than any other day of the week or month. No, seriously, it's not so go ahead and schedule your wedding on that day. Just don't invite me...
2. M. Night Shyamalan's new movie "The Happening" opens today and while I was not a big fan of "Signs" or "Lady in the Water" and I guessed the secret to "The Village" not long after I read a Margaret Peterson Haddix novel, I do look forward to his hubris. He once had the gall to say he was a better filmmaker than Spielberg. Um, "Schindler's List," anyone? "Close Encounters?" Um, no.
3. I'm guest blogging at Teen Book Review next Wednesday, 6/18, and I'll be giving away...something! I'll let you know next week but in the meantime, check out the blog. Jocelyn gets some great authors and does some amazing reviews! I don't think she actually sleeps...or else she's figured out how to read while she snoozes!
4. I hate having a cold during the summer. It's completely unfair. It's hard enough to curl up with a hot cup of tea in SoCal during the winter because the sun still shines most of the time, but the summer? When everyone is outside and the days are superlong? Forget about it. I'm trying to pretend I'm perfectly fine and maybe my cold will get bored and leave.
5. Thursdays just aren't the same without LOST. HH and I are going through withdrawal. I suppose I could read or something, huh? I mean, it's not like I have to watch television...or do I?
Posted by Leigh Purtill at 7:34 AM