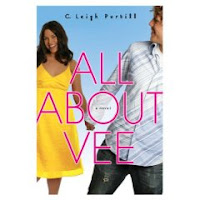 I am HUGELY excited about my new book coming out in April - Amazon says the 3rd but B&N says the 10th and I tend to go with the big A. They actually sent a few copies of MEG out earlier than expected last summer.

So the new book is called ALL ABOUT VEE and it's the story of Veronica May, an actress who leaves her small town in Arizona for the bright lights of Hollywood to seek fame and fortune and maybe a cute boyfriend. The only difference between Vee and the rest of the hopefuls is that she's plus-sized. In Hollywood, she encounters prejudice from people in the entertainment business but worse, she gets it from her best friend.
I love Veronica. She's funny and sweet and smart. She longs to follow in the footsteps of her late mother, who also pursued acting when she was Veronica's age but left for reasons Veronica never knew. In fact, I love this character so much that the first draft of her story was 800 pages long! It's much shorter than that now, don't panic.
In coming weeks and months, I will be gradually segueing into VEE-land here and on the website so look for some brand new stuff!
Your Hollywood connection,
Leigh
Posted by Leigh Purtill at 8:02 AM