There Will Be Oscars 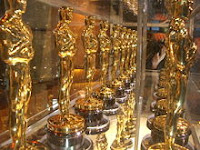 But Will Anybody Come?
Okay, so the only nominated movie I have seen is “No Country for Old Men,” which was fantastic and confusing and well-acted and brilliantly-written and awesomely-directed - and bloody. The bloody part didn’t bother me but the confusing part did. When you see this movie, you will know exactly what I’m talking about.

Now for the noms…where is Will Smith in all of this? No, no, I joke, I know he wouldn’t get nominated based on the field of actors this time around plus, as I blogged before when I reviewed “I Am Legend,” the fact that the movie switched genres suddenly in the third act meant no matter how talented Will had demonstrated himself to be for the first 2/3 of the movie, he wasn’t going to be nominated based on the final third. Sorry but that’s the way it is. If they had stuck to the original story…

And where is Josh Brolin’s nom for “No Country”? He was fantastic! I mean, yes, Javier Bardem was superb also but this was just an amazing role for Brolin. He hasn’t had a role like this in his entire career.

Pretty much all of the noms were predictable. Everyone knew the Paul Thomas Anderson movie, “There Will Be Blood,” would be at the top of the list as would the Coen brothers’ film and “Atonement,” which was based on the Ian McEwen novel. And since “Juno” came out and everyone heard about Diablo Cody’s checkered past, that film has had major buzz around it. I don’t know much about “Michael Clayton” but it was a George Clooney film and Oscar loves George. He/it won’t win but he/it will be nommed whenever he/it is in the race.

Biggest surprise: no nomination for “The Simpsons Movie” in the animated film category. I laughed my butt off in that movie - and saw it twice!

Your Hollywood connection,
Leigh
Posted by Leigh Purtill at 8:02 AM