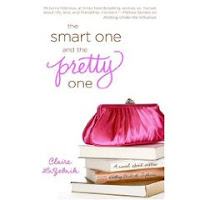 So what do authors do when they're fans of other authors? They go to their readings and take pictures! 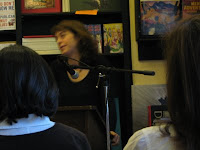 I'm a big fan of Claire LaZebnik and I love her books, KNITTING UNDER THE INFLUENCE and THE SMART ONE AND THE PRETTY ONE. And I was thrilled last Saturday when she came to my local bookstore, Book Soup, which is also apparently her local bookstore cuz she lives in LA too! Yay! Knowing the inside scoop on readings as I do, I played that to my advantage...lol! Actually, it just worked out well. HH and I got there a little early and interrupted her and her family and friends as she was getting ready for the reading (she was sick, poor thing, nursing a cold, but she was charming as can be!). I introduced myself as having friended her on Goodreads. She remembered me, thank god or else that would have been hugely embarassing, and we chatted a bit about books and knitting and I just happened to be standing next to my book, LOVE, MEG. 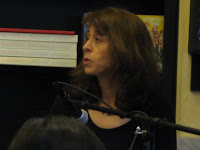 [I swear it was a mere coincidence. We were in the teen section at the time and I was literally right next to it. It's not as if I went searching for it and thrust it at the writer whose reading I had suddenly invaded. Claire was super sweet and even suggested it for her young daughter who was there helping her out.]

She had lots of friends and fans and I was lucky enough to score a seat. After reading a passage, she took questions from the audience and then signed books. I love, love LOVE her books and hope everyone will check them out! 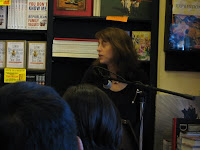 Posted by Leigh Purtill at 7:51 AM