When this animated film came out last year, I thought it looked cute but insubstantial: boy invents time machine and accidentally travels to the future. Nothing to write home about and I wasn't so sure I cared for the animation. But it was really sweet and funny and clever and pretty much nothing like the trailers made it out to be.
12 year old Lewis lives in an orphanage, having been abandoned as a baby by his mother. He is "unadoptable": no one seems to want a child obsessed with inventions and science (a little oversimplified but I went with it for the movie's sake) and he knows that when he becomes a teenager, it will only get worse. He becomes determined to find his mother so he invents a machine that will take memories from his brain and turn them into pictures so he can see what she looked like and find her. At a science fair, where he will present this gizmo, his presentation is disrupted by a young boy who tells him he's from the future and to watch for a Man with a Bowler Hat (his official credit). The machine gets broken during the melee and the anonymous boy whisks Lewis off to the future where he meets an eccentric group of people, the Robinsons.
If you have seen any time travel movies at all, you know our hero has to do something that will set things right but also not disrupt the already-established timeline. And this being a children's movie, you know that it has to end happily. But the way they get to happy is funny and sweet and a little touching. I love the Man with the Bowler Hat - not quite a villain, just a little misguided. The voice actors are terrific, with Harland Williams as CARL the robot a standout. 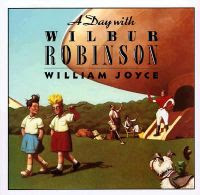 "Meet the Robinsons" was based on a children's book by William Joyce , "A Day with Wilbur Robinson," and there is a wonderful interview with him about it on the DVD. Joyce's book was published in 1990 and was solely about a boy who meets a very eccentric family which was itself based on Joyce's own family. The movie's animation resembles the original illustrations which are beautiful.
The director, Steve Anderson, says he was drawn to the script because Lewis is an orphan and he, Anderson, was also adopted. You can definitely feel his fondness and sympathy for the character throughout the movie.
I think all Vees would dig this.
Posted by Leigh Purtill at 8:01 AM